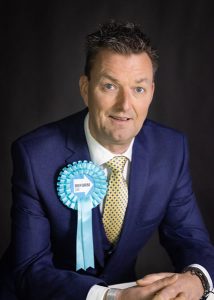 I am Dave Holland. David to my Mother, ‘Dutch’ to my friends since I was a small.

I was born in Woburn Street in Ampthill, and after a few years in Flitwick moved to Riseley in North Bedfordshire. My Father lived in Haynes West End and subsequently Ampthill again until he sadly passed away in 2002.

I moved back south of Bedford in 2011 and have lived in Shillington ever since. I am married to Mandy and we have a house full of Labradors and cats. I went to school in Bedford and have been local to the area my entire life.

Following a few years working for my family business as an engineer I branched out into various sales roles. I later set up several different businesses, some more successful than others.

I am currently Managing Director of an IT Marketing company I created in 2005.

I spend my spare time clay pigeon shooting, touring the UK and Europe on my motorbike and attempting to train our dogs (with mixed results).

We enjoy travelling the world as well as exploring the UK.

Why I Am Standing As A Candidate

During the past few years, I have felt an increasing sense of unease watching firstly the attempts of various elements in Parliament trying overturn a democratic referendum result, and latterly a supposedly right wing Conservative Government increase taxes while simultaneously wasting more than they raise.

None of their decisions make sense. Phasing out nuclear and gas power as well as petrol and diesel without having a viable replacement in place. Legislating the restriction of basic rights such as bodily autonomy for us and using highly damaging nudge theory to coerce the public into accepting restrictions that they considered themselves exempt from.

I reached a point where I began to question what the Conservative party stood for? Who do they represent? The answer I concluded was not me.

I found the Reform Party and feel like I have found a home, like all hope is not lost after all. There are likeminded people just like me. Normal people, hard working, law abiding, tax paying people who are as fed up as I am at watching an overexpanded Government dishing out my hard earned taxes with no accountability.

We can’t afford to maintain the pension triple lock, but we can pay £14 billion per year to foreign governments around the world. For what benefit I am not sure.

We can’t afford to fix pot holes but can write off over £3 billion in furlough payment fraud. Not counting the companies who took furlough money and are still paying shareholder dividends.

We can’t afford to fund the care sector adequately but can waste £37 billion on a track and trace app that never worked. Where did that money go?

Reform UK were asking for applications to get involved. My view was that I could either sit watching the news and shouting aimlessly at the TV or, I could take action and do something about all the ills in our wonderful country.

In time for the next general election we will have in place 600+ constituency candidates offering a viable funded alternative to the existing party offerings. Costed, common sense policies that will make Britain a better country for all.

The gap between rich and poor has grown in the past few decades. The two growth industries during Covid have been food banks and helicopter sales….. that can’t be right.

I am at heart a capitalist, but I can’t find an example of a single billionaire who has made their money by creating jobs. It doesn’t happen. Most modern billionaires have created their wealth by redesigning economic sectors, destroying jobs as they do so.

All we can do as Reform Party spokespeople is to present our policies and make sure that everyone knows all about us.

From that point on it is out of our hands, the electorate will ultimately decide if they want us to form a Government & reform the many failing institutions in the UK.

I feel that the existing political parties have had their chances and they are the reason we are where we are. If we keep doing the same things we shouldn’t be surprised that the outcome is the same. It’s time for change, it’s time for Reform.

I believe that the people know best. That small Government should help people to help themselves. That it is the role of Government to create the opportunities that individuals need to thrive and succeed.

I believe in capitalism. I believe that hard work will get results and that no one owes me a living.

I believe that Government should do what it can to give people a leg up the ladder. To train, to teach, to support when needed.

I believe that good Governance is giving the next generation the tools they need through high quality education so they can succeed. A hand up, not a hand out.

I believe in high quality health care, free at the point of use…. delivered efficiently without wasted spend.

I believe that the UK is the greatest place on Earth to live. I believe that it currently has challenges and is heading in the wrong direction. I believe that with reform of several underperforming sectors we can put the country back on track for the next generation.

I believe that we should put our own house in order before we attempt to ‘fix’ the rest of the world. Once we have zero homeless in the UK, zero NHS waiting lists, zero pot holes, zero robberies, zero rapes, zero muggings, zero stabbings, zero murders, zero online fraud, (I could go on…).

Then and only then should we start ‘helping’ the rest of the world. Giving people money doesn’t in my opinion ‘help’ anyone. It makes them dependent on you.

As my dear Father used to say, “Give a man a fish and you feed him for the day, but, teach a man to fish and he’ll sit in a boat drinking beer all day.” You get my point. Not all aid is helpful. Creating dependency is not healthy in the long term.

I believe that the current habit of soft launch policy ideas for polling feedback does nothing but irritate the public. We are governed by focus groups. I prefer the old system; present a manifesto, get elected, implement manifesto, public votes five years later to determine how good you were.

I believe that sometimes its not about being popular, its about doing what needs to be done, however unpopular it may be.

We know that it is not going to be easy or straightforward to implement all the reforms that are needed to turn this wonderful Country around, but as a society we need to grasp the nettle, take a little pain and push through to a better tomorrow.