We are letting down some of our most vulnerable children. Very often they are groomed because they are in care, easy to exploit & unloved.

Grooming gangs exploit their weaknesses & their vulnerability. The one thing that a care home can’t provide is love. Any attention is better than none & with just a few gifts and promises it is easy to see how they might mistake that attention for love and affection.

Every child in this country has the right to expect to be protected from abuse. Our children should be able to grow up in safety.

It’s time we had an honest conversation about grooming gangs.

Firstly, let’s get one thing straight. This isn’t about race. This is a conversation about the abuse of children. This isn’t about a section of society grooming children, this is about what it should be about, children being groomed.

Regardless of who is the perpetrator of child grooming, they must be treated the same by the authorities, regardless of their ethnic background.

You don’t need to dig too deep online to find reports relating to some of the problems. There are hundreds. Some police forces have been so conscious of not appearing racist that they have failed the youngsters that they should be there to protect.

The first duty of all our public services should be to protect the vulnerable. Above and beyond protecting the delicate sensibilities of those who don’t want to derail the integration of multiculturalism, what about the welfare of our children?

We have also seen instances of some teenagers that have been groomed and coerced into having sex, then facing criminal charges of prostitution. https://www.bbc.co.uk/news/uk-england-43400336

A 12 year old cannot legal consent to sex so it follows that they cannot legally be considered to be prostitutes. If a 12 year old girl is prostituting herself, we need to ask ourselves whose fault that is? Who is to blame? Is it the men who groom and exploit her, or is it the system for letting her down & failing to provide the education, security and safety that she needs?

In these interesting times it’s never been more important to stay connected with each other.

Sign up to my email newsletter and I’ll keep you updated with our campaign progress, events, news and more…

On Your Mobile? Stay Connected:

Something has clearly gone wrong with our care, police and legal system.

While I understand the noble aim of integrating all our different cultures, the practice of hiding or failing to prosecute the crimes and offences of any sector of society causes more division than it fixes.

The question of whether or not multiculturalism is working or not is a separate issue I won’t dive into here. Suffice to say I can’t see much integration anywhere in the UK. I see communities living separately, with little or no attempt at integration unless you count running a shop or restaurant. It is I suppose only natural for communities to stick together, for migrants to stay together in clusters within towns and cities.

The big question, the challenge we face is how we successfully integrate different cultures into one large society.

Our leaders don’t seem to have come to terms with the fact that digital censorship aside; we can get our news and disseminate information outside of mainstream media.

The Government keep transmitting their propaganda across their traditional platforms, thinking that their message will be absorbed by the masses. They still haven’t caught up with the fact that we are not only capable of thinking for ourselves, but we are capable of (for the first time in history) being able to communicate with each other outside of traditional media.

It makes you wonder how long we have accepted ‘news’ that we couldn’t unite in order to question. When you think of the past decades before social media and digital communication, before we could connect with like-minded people, how easy it must have been, as a Government to control the narrative.

Unfortunately for our Government, failing to prosecute grooming gangs, turning a blind eye for the sake of diversity, giving the benefit of the doubt or even, perish the thought positively discriminating against disadvantaged white children in favour of the perpetrators of sexual offences against children is too visible to continue to sweep under the carpet.

I’m not, by any measure a sexual offence psychology expert, much like you, I suspect, your knowledge starts and ends with what you believe is right and wrong. I am just like that. I can see wrongdoing and children that can’t protect themselves from harm.

Many of these children don’t even know that they are putting themselves in harms way. That is not their fault. It is our fault. Our failing. Our education system, care system, police force, legal system, all play a part in letting these children down.

In many instances, the girls had been so well groomed that they thought they were in relationships with the men that groomed them.

A girl starved of attention and kindness is more likely to believe she is in a caring relationship, leaving her perpetrator free to coerce her to have sex with friends or associates.

Some of the girls even protect their perpetrator, despite knowing their behavior is exploitative and abusive. In short, these girls can’t save themselves; they need to be saved from the situations they find themselves in. Police and authorities have too often looked the other way, despite being inundated with complaints and reports. 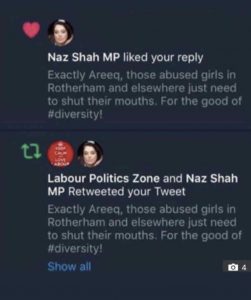 The safety of these girls hasn’t been assisted by unhelpful tweets such as this one from Naz Shah MP, Labour MP.

How Big is The Grooming Gang Problem?

My concern would be that the court cases that we have seen so far up and down the country are just the tip of the iceberg and that there are many, many more victims of grooming gang crime, so far undiscovered.

We have an ever growing list of troubled towns and cities with known grooming gangs including; Rotherham, Rochdale, Oxford, Bristol, Aylesbury, Peterborough, Newcastle, Hull, etc.

It is highly unlikely that other similar cities haven’t been experiencing similar abuses, so far unreported? It is almost inconceivable that the same issues do not blight other towns.

An interesting article published by UCL in 2020 provides evidence that child grooming is not just a Muslim problem, but cross race. https://www.ucl.ac.uk/news/2020/dec/analysis-new-home-office-report-admits-grooming-gangs-are-not-muslim-problem

Grooming gangs operate across cultures and races. If a society is weak on any area of crime it will thrive, uncontested.

We need to know that our authorities are investigating, arresting and prosecuting the members of grooming gangs, whatever their race, creed, colour or orientation. We need to know that everyone who breaks the law will be treated equally in the eyes of the law.

Most importantly though is the need to protect the vulnerable in society, to protect their childhoods, to keep them safe from harm. That is the very least we can do.

* We guard your data as if it were our first born child. You have our word that we won't sell it, rent it, share it or let it play in the street unsupervised. You can also unsubscribe any time from the link in any email we send to you.

Parole Board & Sentencing Reform Reform of the Parole Board, Custodial Sentencing & Judicial Policy (and Social Services) Who has ..
May 13, 2022