Should We Fear The World Economic Forum (WEF)?

Is WEF a Force for Good or Evil?

The World Economic Forum (WEF), better known as an annual meeting of the rich and powerful at Davos is more than just a think tank. Klaus Schwab is the founder and executive chairmen of the organisation, attended annually by the leaders of countries and companies from around the world.

Shortly after the outbreak of Covid 19 in the spring of 2020, the phrase “Build Back Better” appeared across the world, being touted by numerous world leaders. 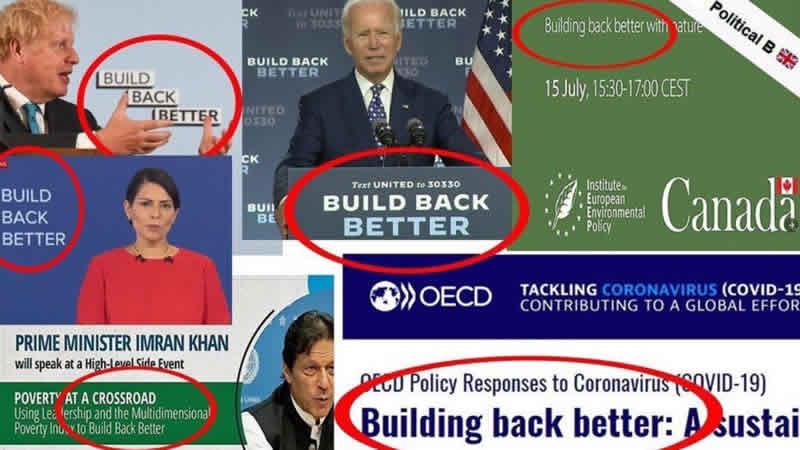 Coincidence or intensional strategy? We have a situation where many of our world leaders are getting together to map out unified strategies to take us god knows where.

If you haven’t read Klaus Schwab’s book called “The Great Reset” then you really ought to, if for no other reason than to familiarise yourself with what they have planned for us.

This isn’t a conspiracy theory, it isn’t conjecture or suspicion. The man in charge of the organisation that all our political and corporate leaders belong to has written about resetting society, using the phrase “You will own nothing but you will be happy”.

It sounds very much like a desire to give corporations more power and the general public less power.

As a general rule of thumb, historically, Governments have protected the people from the greater excesses of corporations desire for profit at all costs. I can only begin to comprehend the hell that would exist if corporations were given unfettered control of our lives.

Klaus Schwab extols the virtues of the 4th Industrial Revolution. In blunt terms, this equates to mass unemployment due to mass automation & AI (artificial intelligence). Instead of having a job and earning a living, you would receive a Universal Basic Income, but have no bills or outgoings. (you would own nothing).

Quite how the practicalities of this would come into being is anyones guess. If you currently live in a £2m mansion with a mortgage on it, would it be seized by the government, or the mortgage cleared and you would continue to live in it? To live equally in this equal society, surely we would all need to live in identical homes? Families with more children would need more room so be ‘given’ a larger property, instantly creating inequality.

In these interesting times it’s never been more important to stay connected with each other.

Sign up to my email newsletter and I’ll keep you updated with our campaign progress, events, news and more…

On Your Mobile? Stay Connected:

Needless to say, Klaus Schwab’s vision of our distopian future is somewhat lacking in detail and how a society would migrate from our existing lives to the new world.

The biggest question that needs answering, is how, our world leaders and corporate bosses can attach themselves to an organisation that in plain sight has described their ideal future for mankind? This is an organisation that has openly stated that the worlds population is too large to be sustainable and it needs to be reduced.

They did not say; “we need to stop the population growing any further” (which would maybe come across as slightly less genocide like). They want to reduce the population. If you listen to highly qualified chemist and virologist Bill Gates, he wants to reduce the population via the medium of vaccines. In itself this is sinister. I thought that vaccines were for the purpose of preserving life, for preventing death. How could they possibly be used to reduce our population?

Now, we are in the situation where a financial contributor to WEF and WHO (World Health Organisation) is suggesting openly in public that vaccines can be used for population control. I find that more than a little concerning.

It is quite clear that our current economic model isn’t perfect. Western economies are unsustainable in the long term & have been for decades, hence the need to seek ever cheaper maunfacturing and product supply to kick the can further up the road. We print money in the good times as well as bad, as if Governments know they will never need to pay it back. Or, in the knowledge that we will never need to pay it back.

Worldwide we have trillions of debt circulating in an ever growing spiral, downwards. There will come a time when it becomes unserviceable for us all. So, what happens then?

Would that be “The Great Reset”? The start of the ‘New World Order”.

The WEF have a plan for a great reset & saw the Covid-19 pandemic as an ideal opportunity to begin to ramp up its implementation.

“The proposal focuses on the central issue of global inequities in wealth, health, and resources. It suggests a global redistribution of wealth, achieved through cooperation among the wealthier nations.”

The renaming of shareholders as stakeholders has been a relatively recent phenomenon, an attempt to hide the drive for greater profits behind some noble greater good.

In the same way that pharmaceutical companies can see no profit in creating a cure for a disease, preferring for economic reasons to sell long term medication to treat symptoms. I can’t help but think that if the desire for profit was not involved, we might actually develop cures for diseases at a greater rate.

As a commercial enterprise why would you sell one pill or jab to people if you can sell an ongoing treatment? It is just sound economic policy after all, even if it is a little sociopathic.

The end result of the World Economic Forum new world order looks set to end up consisting of a wealthy elite, and a mass underclass who if they aren’t careful will be reduced to manageable. ‘sustainable’ numbers.

I find the whole concept quite frightening and what is even more frightening is that the plan is published for all to see. We should be a lot more suspicious than we are of anyone who is involved with the WEF. Our political leaders, royal family, billionaire business owners all attend. They all take this project seriously.

We face a series of stepping stones to get us from where we are to the new world order including digital ID & a digital currency, which is an essential to be able to control a population. Once you lose control of your money, a government can control every element of your life, withhold funds & only allow permitted purchases. If you are existing on a universal basic income then you will be completely at the mercy of your government.

I find this view of our potential future quite alarming. It doesn’t sound like a future I want to be a part of & I will fight against it’s implementation and the steps that will remove our freedoms to get us there.

The implementation of great change never happens in one step. Governments use the term ‘Salami Tactics’ as change is carried out slice by slice. Individually, these slices in and of themselves are not huge, not lifechanging, but as they stack up together, the desired changes are forced upon populations. You only need to look at how Hitler changed Germany in the 1930’s to see this strategy in use.

The Nazi’s didn’t announce on day one that they would be murdering millions of Jews. What they did, was step by step to introduce ID papers (for the safety of the German people), then travel restrictions, segregation by dividing the German population and turning them against each other (Divide & Conquer is a bedrock strategy to control a population). This was followed by internment camps & then on to gas chambers and the atrocities that followed.

Did the German people see what was coming when Hitler introduced ID papers? I think not.

The introduction in democratic countries of restrictions on civil liberties should concern everyone. Here in the UK we are currently seeing changes in the law restricting some forms of protest. Under the guise of prevently climate nutters from blocking roads, the Government are giving themselves greater powers to stop protests in the UK.

Additionally, the law is also being changed to allow our Government to seize financial assets of people and organisations it disagrees with. Today it is being used for Russian Oligarchs which you may well think is a good idea, but what about tomorrow? What if you want to protest something our Government does in the future, but are prevented from doing so? What if you repeatedly protest and they seize your assets to shut you down?

I am not saying for a moment that this will happen, of course no UK Government would lock down it’s people, close down businesses and prevent gatherings, or fine people for disobeying. That would never happen. But with these changes in the law, it could…. again.

Go one step further, to a time where we all have a digital ID & use a CBDC (Central Bank Digital Currency). Cash has been stopped, so you would need an active ID to access your digital currency, to buy food, pay bills, to survive. Imagine that you have a ‘social score’ attached to your Digital ID that measures your behaviour. If you think this is far fetched and never going to happen, it already is in China.

I recall only a couple of years ago watching China lockdown its population at the start of Covid and thinking that it would never happen here. It did.

Will this come to pass? Who knows, but my view is that each and every restriction on our civil liberties is one step closer to enabling such a future and should be resisted in a free, democratic country.

* We guard your data as if it were our first born child. You have our word that we won't sell it, rent it, share it or let it play in the street unsupervised. You can also unsubscribe any time from the link in any email we send to you.

Parole Board & Sentencing Reform Reform of the Parole Board, Custodial Sentencing & Judicial Policy (and Social Services) Who has ..
May 13, 2022